I am so happy to announce that my musical Love Quirks which won 4 Off-Broadway BroadwayWorld Awards including Best Musical Production and Best Score for my music/lyrics officially OPENED OFF-BROADWAY and is running till Saturday, September 3rd, 2022!!! TICKETS ARE AVAILABLE AT LOVEQUIRKS.COM/TICKETS.

Here are some review quotes:

“The millennial’s answer to the George Furth-Stephen Sondheim tuner [“Company”] is just as wickedly witty, and just as much a journey worth taking!…A sort of Friends-meets-Company mashup for today’s audience…Bisen-Hersh’s music…is catchy and bouncy…to offset the somber struggle of the subject matter, but is also tender when it needs to be, allowing insight into how these four really feel about themselves, their partners, and their friends. The thoughtful, poignant lyrics…do much to both move the show forward, and mine through the characters’ emotions conversationally to get at what they really want.” — Theater Pizzazz

“It is easy to see why LOVE QUIRKS, A New Musical Based on True Events, is the recipient of four 2021 Broadway World Off-Broadway Awards. This show recounts the joys and despairs of four 30-somethings…dipping and re-dipping their toes into the love pool. Seth Bisen-Hersh’s fresh lyrics and music performed by strong resonant voices move the story by Mark Childers along to places we have all been. The insecurities of coupling, the pugnacious nature of divorce, the pain of betrayal, and the general anxieties blend beautifully with the resilience of renewal, the hope of triumph, and of course the like-no-other-feeling of being in love. And yet, despite all the trials and tribulations, trust and desire keep us coming back for more. LOVE QUIRKS is a great reminder of the power of love and couldn’t show up at a better time.” — eljnyc.com

“Love Quirks spins out as a pleasant romp through the modern mine-field of romantic and sexual relations, its strength in the delightful music by Seth Bisen-Hersh…Bisen-Hersh is a prolific composer whose melodies and lyrics are easy on the ear and generally clever.” –Nightlife Exchange

“You can’t hurry LOVE QUIRKS. After a 27-month hiatus due to the 2020 pandemic, the award-winning musical has returned to off-Broadway with 18 songs and some timely Tinder wisdom: being ‘single and ready to mingle’ means recognizing quirks, ignoring smirks, and rejecting jerks…Without exception, the ensemble is strong from start to finish…I later listened to the soundtrack on a streaming platform and savored the playful lyrics, vocal arrangements, and orchestrations.” — BroadwayWorld

More information about the show can be found, here and here!!!! Also, the original off-Broadway cast recording is available on all streaming platforms, and if you’re old school, you can order one of the 500 limited copies at Kritzerland!!!!

Here are interviews I did with the SaysMeSaysMom & Un-Block the Music blogs about the show… and here’s a recent article I wrote about my journey from my hometown to NYC!

The original off-Broadway cast of Love Quirks reunited on Saturday, October 30th, 2021 at 4:30PM at Don’t Tell Mama where we also presented songs from my new musical, The Secret Adversary, a modern adaptation of Agatha Christie’s murder mystery. You can watch 8 songs from the concert on my Song Videos page! We also received a RAVE REVIEW: “Bisen-Hersh was wonderfully at home at Don’t Tell Mama…The warmth and joy of the concert was infectious. We were all happy to witness this celebration of Bisen-Hersh’s work and the musicians and singers who realized it.” You can read the rest of it: here! 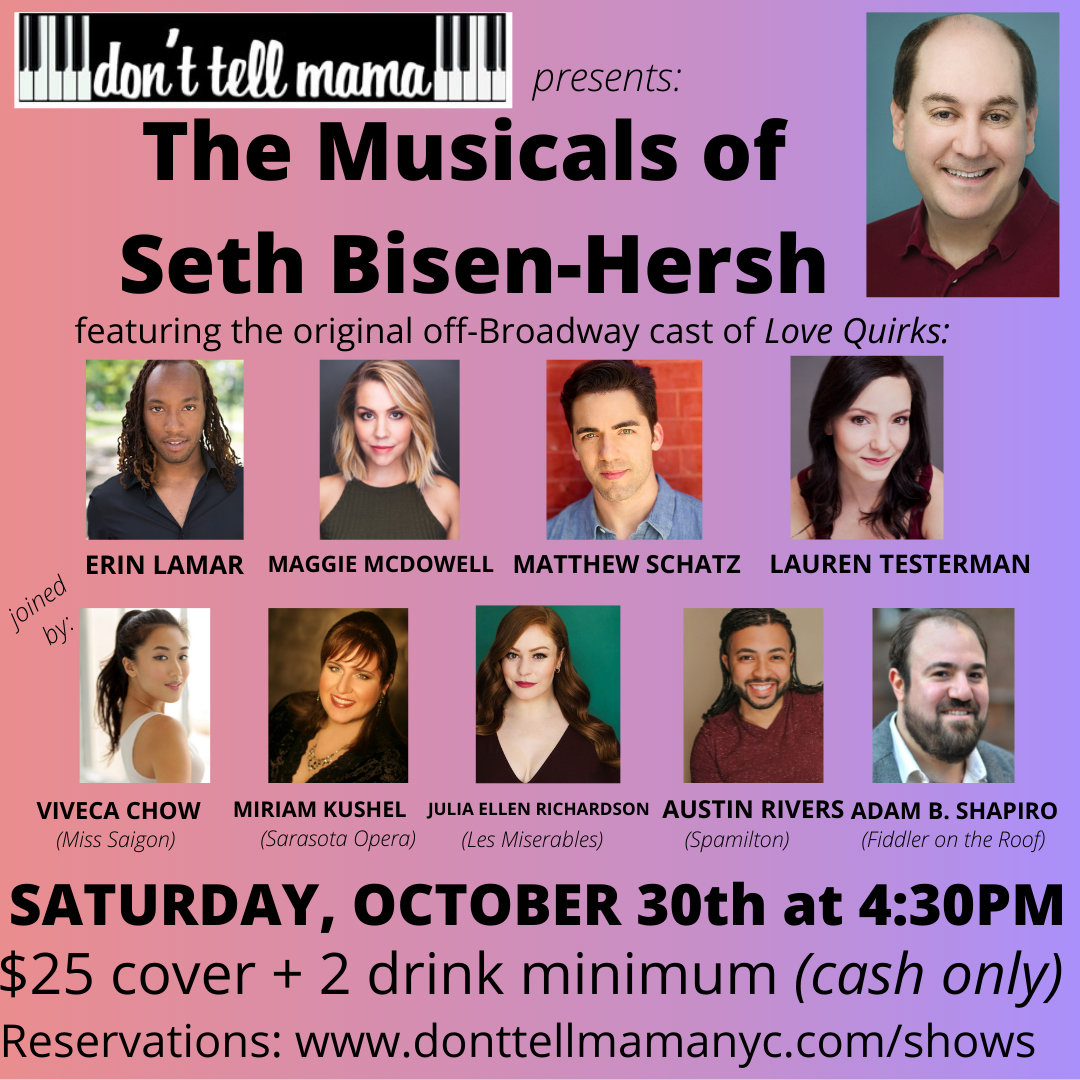 Furthermore, I’m happy to announce we recorded the Love Quirks Original Off-Broadway Cast Recording last fall! To that end, we did a benefit concert of my Self-Isolation Song Cycle on Thursday, September 10th, 2020 at 7PM on FB/YT Live. You can watch it HERE!!

Tuesdays in January 2022, I presented 4 Sondheim Tribute Cabarets featuring 45 singers. Details here. I thought I should upload at least one video of myself. Here is my rendition of “Good Thing Going” from “Merrily We Roll Along”, dedicated to the late, great Stephen Sondheim.

And now it’s back to regular showcases for the rest of the year! Visit the Showcase page to see who is performing LIVE Tuesdays at 7PM at Don’t Tell Mama and for the list of the over 3,500 performers who have previously joined me since 2007 and here’s an interview I did after one in 2019 and a review of the 550th Showcase in 2019, which was a Jerry Herman Cabaret.

In 2022, I’m adding a new hyphenate to my resume: film composer. Please check out my profile on SoundBetter if you’d like to (literally) hear more!

On June 18th, 2021, my friend Celia and I produced an incredible SOLD OUT concert of my songs with Broadway stars and a four-piece band to celebrate performing live again at Don’t Tell Mama. According to Stephen Mosher of BroadwayWorld.com: “When it comes to curating talent both Seth and Celia seem to have a particular know-how that might, one hopes, lead to further endeavors like this most enjoyable one from last night.” Read more of our glowing rave review, here. And see 8 songs from the concert on my Song Videos page!

The third season of my podcast, Millennials are Ruining the World? an Xennial perspective: Real conversations bridging the gap between Generations X & Y, “I’m not woke, but I’m awake” has concluded, but you can catch up: here!

For those who missed it, in 2020/2021, I produced 44 virtual showcases, featuring 232 singers streaming live from 35 states and 7 countries, and I am now selling the 442 accompaniment tracks I created for only $5: here. You can also watch the virtual showcases forever at: tinyurl.com/sethbhdotcom. Additionally in 2020, I had 30 episodes of my Facebook Live show “The Making of a Musical: Exploring Love Quirks” then 24 episodes of talking about my other projects in “Seth Sings Bisen-Hersh”. I also put out twelve new songs about quarantine in my Self-Isolation Song Cycle. You can watch the whole set: here! Additionally, for 15 Thursdays, my friend Kelly and I put up a talk show called “What Day Is It!?! with Seth & Kelly”. Sunday nights, my wife and I put out Zumba videos for small apartments, and ended up with 41 episodes. Even if you can’t do Zumba well, you can at least take solace in the fact that neither can I. Those are available at (and I highly recommend watching her birthday surprise!): tinyurl.com/SethEmiStreetZumba.

We re-released our Get Out the Vote Video from 2018 last November 2020. You can hear me overdub TV star Mario Lopez at the end to change the date!

The audiobook version (featuring myself as narrator!) of my third book: Millennials are Ruining the World! is now available on Audible, HERE!!!!

Additionally, I started doing some standup in 2019. Here are videos from me at Gotham Comedy Club: here and Broadway Comedy Club, here and here! While I’m presenting videos, August 2019 I got a little bored so I did this cute Muppet Green Acres video: Enjoy! In other comedy news, I’m now a graduate of UCB having had completed their core Long-Form Improv program.

In 2019, I launched my Performer Page where you can find videos of standup, monologues, scenes and a still from the first feature film I shot!

So happy to announce that “Enough Already” from The Diamond as Big as the Ritz was selected out of almost 200 songs as a finalist for London’s prestigious Stiles & Drewe Prize!! If you didn’t see the Get Out the Vote music video of it starring Mario Lopez last October, you can view it, here. Speaking of it, after successful industry readings in November 2017 and June 2018, we recorded the studio casting recording of my musical, The Diamond as Big as the Ritz. You can purchase it on iTunes or Amazon, and it’s also streaming on most platforms. There are also videos of some of the songs on the Song Videos page.

Check out the side section: “Seth Abridged” for links to my sitcom pilot, my books, my music YouTube channel and my CDs. Or click on the Every Day a Little Seth page to watch the sitcom pilot directly. Please watch and share it with everyone you know, as we hope to get it to a network/streaming platform.

You can now get the sheet music to almost 200 of my songs at the Seth Store!

And for those of you who are Ob-Seth-ed, please check out the personal section, which features my ledger blog, picture galleries, my former cat: Smee’s page, puzzles I’ve written and more! If you haven’t read my epic trip highlights, here are direct links: Switzerland/Milan/Belgium, August 2019; Portugal/Spain/Gibraltar/Morocco, May 2019; Scandinavia, August 2018; India, January 2018; United Kingdom, May 2017; Poland/Austria/Prague, July 2016; Iceland, May 2015; Germany/Paris, August 2014; Ireland/Copenhagen, Sept 2013 and Shanghai, Feb 2011.