Broadway Meows is an annual concert of Seth Bisen-Hersh’s songs, with the proceeds going to the Humane Society Of New York. 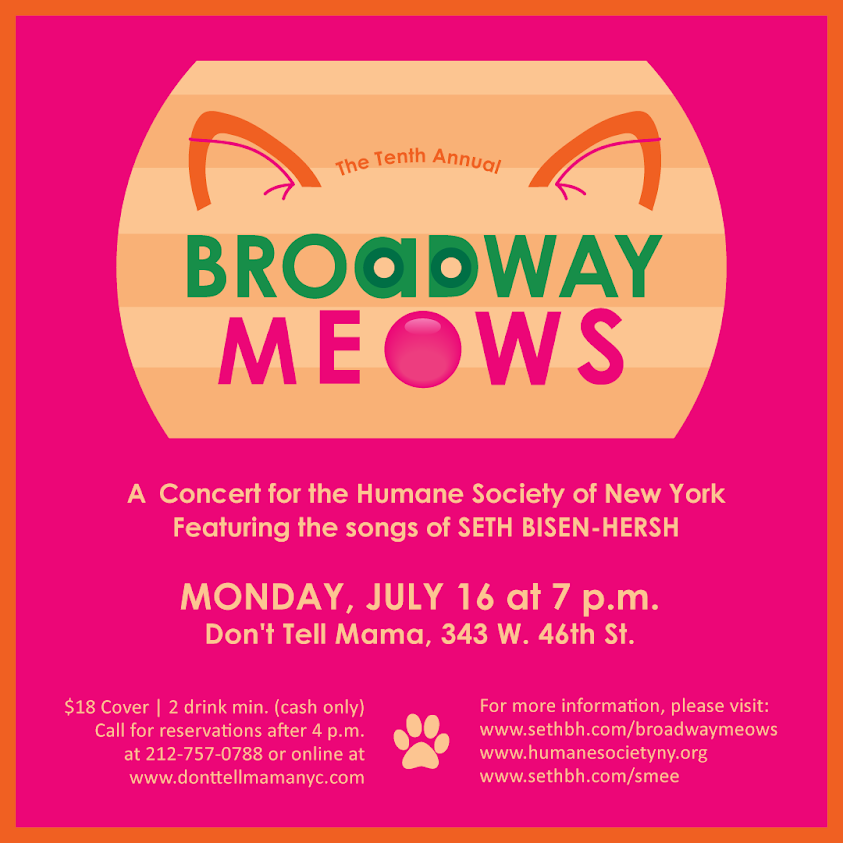 The TENTH Annual:
BROADWAY MEOWS
a Concert for the HUMANE SOCIETY OF NEW YORK
Featuring the songs of SETH BISEN-HERSH

Rise Above My State, Sung by Travis Ward-Osborne
The Wedding Song, Sung by Miriam Kushel Would you like to support Broadway Meows, but cannot attend? Please click the link below to donate to the concert. THANK YOU for your generous donation; we GREATLY appreciate it, as do the puppies and kitties!!

I Like Big Girls!, Sung by Jelani Remy
Love Haikus, Lyrics by Megan Sass, Sung by Celia Mei Rubin
Eat Dessert First!, Sung by Adam B. Shapiro
I’m So Sorry, Sung by Tyler McKenzie
Who Knows Why?, Sung by Elliot Lane
A Dream Within a Dream, Sung by Dani Granati
Love Me for Me, Sung by Kimberly Faye Greenberg Pictures and videos from Broadway Meows 2013: Seth at the piano Seth & the Pet Board The following is a transcript of a review by Mark Savitt of the Manhattan Cable show, HI! DRAMA:

“Broadway Meows was a really enjoyable benefit concert for the Humane Society of New York. I felt bad I didn’t have any extra money to give them, so please contribute if you can. It featured the songs of Seth Bisen-Hersh, and he was like the emcee. I had never seen him before so I didn’t really know him, but his first song was about being obsessive compulsive, and he certainly seems to be but in a charming and funny way. And his friends, including the incredibly handsome Brandon Ruckdashel, were singing songs about being animals, or being rejected in love or wanting to find a lover, putting up pictures of their cats and dogs. Brandon didn’t have any cat, but he put up a picture of his favorite Kitty… Kitty Carlisle… it was really nice, and Don’t Tell Mama’s a fun place to be, so if they do something like this again – please go!”